Nhuju Kassie lay still in the long dry grass. He paid no heed to the searing heat of the sun. An intense urge to scratch at his left buttock came over him, where a fly was playing with his delicate senses. Even at the age of nine, he knew that such a slight move might give him away. He gritted his teeth against the irresistible urge to scratch, and watched with a fearful curiosity as the strange looking people crossed the desert ahead of him.

His instinct was sharp. He could sense the fear and could smell the people. They appeared and smelt as nothing he had ever experienced before. His sudden deep longing to be back in the cosy hut with his parents and siblings was pulling knots in his stomach. He sensed danger.

Nhuju Kassie was from the #Khomani community of Natal province. He was out alone for the first time in his life on a three day walkabout, his first step towards manhood. He was sent out by his parents, without food or water. He had no clothes to protect him from the sun, or tools to help him kill for food. The San people believe that they are at one with the nature. At an early age they learn to survive in the most uninhabitable conditions. This was Nhuju’s first test.

His taught muscles remained still as he stared at the line of small wagons. He counted eighteen people. Twelve of them were like him, brown skins, but with different faces. He knew that they were not San, and remembered overhearing the words of his parents as he lay in his cot at night. He had heard them talking about the new dangers coming from far away; From people who spoke and acted differently; From people who were cruel and wanted to harm them. His instinct told him that these were such people. Six of them were pale skinned, carrying long strange sticks. He could see that they were sweating, probably the cause of the stench he had become aware of almost an hour before he saw them.

Suddenly one of the pale men pulled his stick to his face and pointed it in front of him. He watched in amazement as the man swirled round, pointing the stick at a baby antelope, which had somehow become separated from its mother. The sound was deafening. A loud clap vibrated in his eardrums as he saw smoke appear from the stick. At the same time the antelope calf fell, first onto its front legs and then as if in slow motion it tumbled down onto its side. 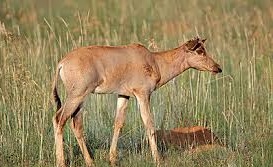 As the man began laughing Nhuju forgot all he had learned. The shock of the rifle shot and the evil power he sensed caused him to break out into a run. He tried to keep low, but was spotted by one of the black men. As he ran, he heard the dull muttering from the group and sensed that they were running after him. He ran as fast as his little legs would carry him, but it wasn’t long before he heard their steps behind. Knowing that they would soon catch him, he stopped dead, lay down, and froze. As if in death he stilled every muscle, every nerve, and every breath. He heard them stop and converse in their strange language. Then they spread out. He concentrated on becoming part of the desert, blending in as an invisible part of the nature, just as his father had taught him when out hunting.

He felt the shadow wash over him as a giant approached. Still, he lay motionless, aware that he would soon be dead, just like the baby antelope.

Nhuju then opened his eyes to the sound of loud laughing. The giant towered above him, rocking with laughter before he said, “Well what do we have here? Is it a boy or a little desert rodent?”

Two other giants came around and joined in the laughter, before grabbing Nhuju like a wild animal and carrying him back to the group.

“Look what we have here Buana”, said one of the giants.

“This is a desert boy; A Bushman. Their village must be near here. Where is your village?” The voice came from one of the pale men, the same one who shot the antelope.

Nhuju stared at the man’s stick. His curiosity was more intense than his fear as he studied it, realising that it was no ordinary stick, but something far more complex. He could never make one of those without help.

As he looked up at the man, the words of his parents kept ringing in his ears. He had never seen one before, but knew that these must be the evil strangers his parents were talking about. They smelt so bad. Nhuju, trying to control his shaking to avoid showing any fear, spoke to the man, “what do you want with me? Let me go.”

The white man grinned. He heard only the clicking consonants of the San tongue. He watched with some interest as he realised that this little boy was trying to speak to him. He seemed to be using his throat, nose and pallet all at the same time, which fascinated the white hunter. Then his grin became more serious. “We will learn nothing from him. Move on,” he commanded.

As the native who was holding him relaxed his grip, Nhuju broke free and ran for his life. He glanced round to see if they were following him and saw the deadly firestick pointing at him. He prepared himself for the pain and his quick return back to the earth and the reunion when he also would become dust.

John Duggan raised his rifle and had the little bobbing head of Nhuju is his sights. He knew that he could not miss. He squeezed the trigger slowly and the shot rang out across the desert floor, causing snakes to stiffen, rats to dive and ears to prick for miles around.

Nhuju heard the shot but kept running. John Duggan had raised the rifle at the last minute and fired into the air. With a thoughtful sigh, “Come,” he said. “We have wasted enough time.”

Nhuju realised that he was still alive. Eventually he stopped, turned and saw the train of carts and men marching off into the distance, leaving only their smell to hover on the sand, like an invisible cloud of human terror and destruction.

He was tempted to return immediately to the village, but knew that this would be considered failure in his father’s eyes. How he longed for the comfort of his family, but knew that a man must learn to fend for himself. He must continue for two more days before he can return to that bosom.

Nhuju wandered in the desert as was his destiny. Survival was automatic for him. He found water where there was none, he ate beetles and insects. He slept under the hot sun and was excited to be on this mission. In keeping with the long San traditions he merged to the desert and they coalesced in a peaceful serenity. The two days passed quickly.

While entering the village he tried hard to keep a glowing smile from his face. He was a man now, and must be serious like his father. Laughing was for children. He imagined how proud his parents would be when they saw him. How his mother would prepare the welcome feast for his return. Although this was the first of many walkabouts and he would have to kill his first antelope before he would be fully embedded as a man of the tribe, for him this was the most important one. It was the first step towards manhood.

He entered the external boundary of the village and stopped short as he realised that something was wrong. A feeling of sheer terror came over him as all of his faculties raced into overdrive. He could hear no children playing, no sound of women as they pounded the food or sat chattering around the cooking fire. It was quiet, and worst of all, the evil smell of white men was in the village.

Nhuju let out a frightening howl which shook the very ground when he saw what must have happened. The village had been decimated. Most of the huts were destroyed. The ground was dotted with red patches and gleaming white bones, where the bodies of his family and other families had been cleaned by the nature of the desert.

Nhuju sat for two days under the hot sun. His little body shook with the sobs and memories of his family. He concentrated to remember all he could from the stories he had heard. These stories would be the only record of the village, the only memories to carry forward. He swore to himself that he would keep the images of his family with him forever.

As daylight emerged on the third day Nhuju slowly came to his feet and walked out of the village. He will never celebrate with his family the final step of his journey into manhood, the killing of his first antelope.

This would become his final walkabout. 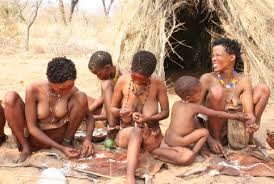